“It is a joke”. Ongoing conflict and controversies over “return” in Sudan’s Darfur region

“It is a joke”. Ongoing conflict and controversies over “return” in Sudan’s Darfur region 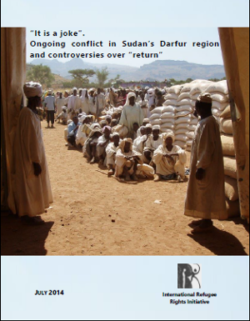 The International Refugee Rights Initiative released a new report today,“‘It is a joke’. Ongoing conflict and controversies over ‘return’ in Sudan’s Darfur region“. The report brings the voices of the displaced to light, documenting their experiences around the controversial issue of return. It reveals that although the security situation in Darfur remains precarious, internally displaced people (IDPs) are coming under increasing pressure by the government of Sudan to leave the camps.

Although some of the displaced are returning, they are doing so in small numbers and in highly precarious circumstances. They are making rational choices, but they are doing so in a context of almost impossible odds. It is clear, therefore, that return is failing to take place in anything akin to “voluntarily, in safety and with dignity”, as required by the UN Guiding Principles.

Since the current conflict in Sudan’s Darfur region began in 2003, an estimated three million people have been displaced. Darfur may have faded from media headlines, but conflict and displacement have continued, and is now again on the increase. Over 300,000 have been displaced since the start of 2014, in part because former Janjaweed fighters, re-equipped and re-hatted as the government’s Rapid Support Force (RSF), have gone on the offensive.

The report, based on interviews with 119 individuals across the five states of Darfur, shows that despite the ongoing violence, people are moving to their villages temporarily or permanently. Those who are returning describe their motivation in terms of worsening conditions in the camps and reported numerous difficulties and dangers upon return.

This “return” – or rather the movement of displaced persons within Darfur – was described as happening in several ways.

The most common type of return was described as “temporary return” in which the displaced move on a seasonal basis for the purpose of cultivation and was seen by those interviewed to have been driven by reductions in humanitarian aid since 2008 rather than an improvement in conditions in return areas. Those interviewed described scenes of intimidation and abuse, including women being raped, as well as the necessity of having to pay a “tax” to local militia, generally identified as Janjaweed.

The second type of return was described as “tourist return”; a staged process of return, assisted by the government’s Humanitarian Aid Commission (HAC), whereby individuals are taken by truck to a specific area where they stay for up to a week to allow the government to demonstrate to the international community its progress in assisting return. Third, incidents were reported in which representatives of groups of displaced return to their home areas from time to time to see if those who took their land after they fled have left or are still there.

In this context, return does not meet even the most basic criteria of a “durable solution.” Therefore, more needs to be done to support and protect the displaced of Darfur – and, ultimately, to end the conflict and create the conditions for sustainable return.