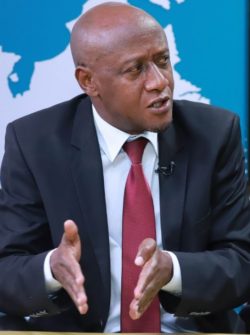 Dismas Nkunda is the Co-founder and Chief Executive Officer of Atrocities Watch- Africa. Dismas was also co-founder and co-director of IRRI. He is a well recognised Ugandan who made his mark on the African scene through journalism, and his work on humanitarian assistance, human rights and international and regional development agendas in relation to protection of basic human rights, rule of law, good governance and basic freedoms. He is a frequent speaker before the UN, Africa Union, Regional Economic Communities, international and local media outlets and other world forums on the plight of the poor and what rights accrue to the less privileged, good governance, freedom of association, rights of movement, international justice and accountability and responsibility to Protect.

Dismas has led many initiatives in Africa, notably his work on Darfur, South Kordofan and Blue Nile, Northern Uganda, South Sudan, Sudan, Kenya post-election violence and attendant quest for justice and campaigning to end the human rights violations in Africa, and protection of forced migrants on the continent. Prior to founding IRRI, he was the Africa Coordinator of the International Refugee Programme at Human Rights First, USA, where he was responsible for designing, and coordinating and implementing advocacy strategies to enhance refugee protection in Africa. Before joining Human Rights First, he worked as Deputy Country Representative for Africa Humanitarian Action, an African NGO that provides relief to displaced populations across the continent. An award-winning journalist, Dismas worked as reporter and editor for many years for newspapers in Uganda including Weekly Topic, The Monitor, The Crusader, where he covered politics and conflicts in the Great Lakes region, including the 1994 Rwanda genocide. Dismas graduated with a Masters of Arts from the Fletcher School of Law and Diplomacy, Tufts University (2001) and concurrently studied Press, Politics and Public Policy at Kennedy School of Government, Harvard University (2001). He holds a B.A. in Mass Communication from Makerere University, Uganda (1992), a Certificate in the Study of Refugees and Forced Migration from the University of Dar Es Salaam, Faculty of Law, Tanzania (2000), and an LL.M oil and Gas.

He lectures on refugee and displacement in Africa, human rights law, international criminal law, International humanitarian law, good governance and International Justice developments. He regularly speaks about the plight of war victims and has written extensively for regional and international publications and is a columnist for The Observer newspaper in Uganda.