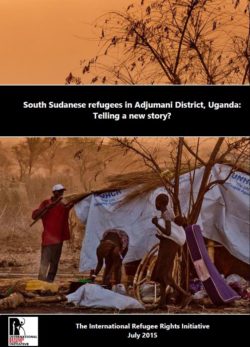 While Europe squabbles over the acceptance of thousands of migrants and asylum seekers arriving over the Mediterranean, over the past year 154,134 refugees of South Sudanese origin alone have been assisted in Uganda, with Adjumani District receiving around 87 new arrivals every day. Despite the fact that Adjumani is itself recovering from decades of conflict, national and local officials and the host population are finding ways to accommodate refugees both inside and out of the camps.

Almost a year since the launch of UNHCR’s Policy on Alternatives to Camps, research undertaken by IRRI, “South Sudanese refugees in Adjumani District, Uganda: Telling a new story?” explores both the factors that compel refugees to remain within a camp structure, and those that enable them to move outside. The report, based on interviews conducted in February 2015 with refugees living in and out of the settlements, members of the host community, and local authorities, builds on research IRRI published in 2014 which looked at the then newly arrived South Sudanese refugee population in Adjumani District.

Despite recognition that Uganda’s refugee policies are preferable to many in the region, the findings show that they still fall short of the vision of refugee protection set forth in UNHCR’s new policy. The report finds that there are considerable problems facing refugees both inside and outside the camps, but offers important insights into how alternatives to camps can be pursued. Almost unanimously, those living outside the camps described their situation more favourably than those inside. Those living in the settlements expressed a desire to move out: “[t]hose who are here [in the camp] now are staying because they do not have better alternatives. Those who had alternatives are out there studying and doing business.” (1) However, they face serious obstacles in doing this in the need to obtain travel permissions, the lack of start up capital to allow them to establish themselves outside the camps and a lack of assistance structures to act as a safety net for the vulnerable.

The findings also show that integration of those who had left the camps was facilitated by a positive attitude on the part of the host community, “[The refugees here] live well with the community and we do not have problems with them.” (2) However it is important that this acceptance is not taken for granted but built on so that the benefits already seen by the host communities continue: “[t]he presence of the refugees has done quite a lot for Adjumani [town], we now have drugs in the health units which benefits everyone. So their presence is also a blessing in this community.” (3)

Refugees and their hosts are already charting a course for integration and acceptance outside of camps, and UNHCR and the government of Uganda must learn from their experience to build structures that better protect rights and give refugees the best possible chance of becoming assets rather than burdens. In the words of one host: “…they … just [want to] make a living like any other human being instead of suffering in their country due to war.”(4)